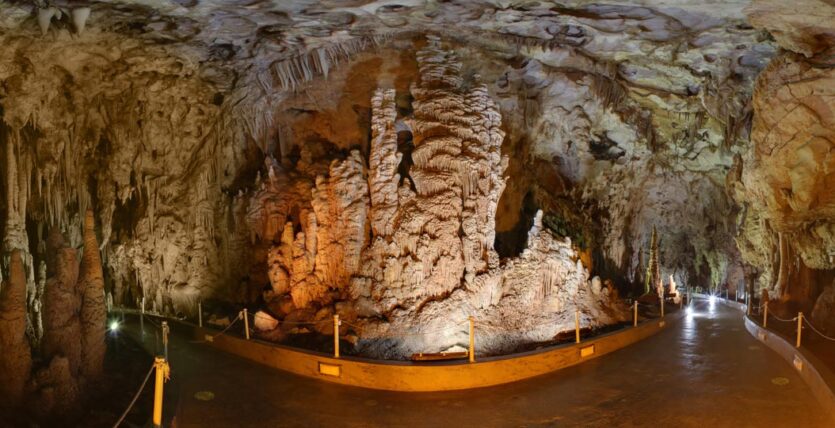 Very impressive is the big variety of stalactites and stalagmites inside the cave mostly because of the difference of their shapes and their age
The older stalactites are mainly in the galleries which are on the right side of the entrance. On the other hand the “infant” stalactites on the left side of entrance .

They are the limestone tubular formations which are growing from the ceiling and downwards. Their length fluctuates between few centimetres and many metres

They are formed as the water drops, which carry acid carbonate, fall on the ground under a stalactite. When a stalactite meets a stalagmite, we have a new formation which is called “column”

It’s a rear kind of stalactite which is developed on the sides, on the floors even on the ceilings of the caves, towards many directions (up, side and down)

They are being developed as the water comes out through very thin fissures of the rock. Many times their diameter is of some metres.

They are another kind of formation which is also very interesting. Small barriers of calcium carbonate which are placed on the floor of the cave. The creation depends on the rainfall in the area of the cave

On Gour evolve a rear fauna

The “egg- shaped ” and the ” Tumour – shaped ” are different kinds of formatious. They are dark – coloured and usually found shaped.

The ” Cauliflower- like” formation is another type of cave deposites. We can find them usually on the main body of a stalactite or a stalaguite.

And finally the ” Heccendrites” in a variety of shapes.